Michaelee-Jayne McDonald may look at home on the rugby field or out in the Sumner surf, but this beautiful local is equally at home on a runway or a glamorous photoshoot. 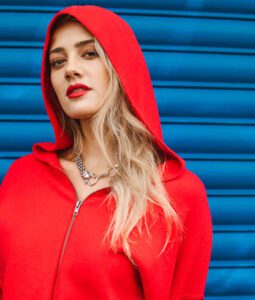 Scouted by Portfolio Model Agency Director and owner Mel Radford-Brown four years ago as a 16 year old in a model search competition, Michaelee had recently recovered from a surfing accident.

She broke both her jaw and her nose, requiring about 80 internal stitches. Doctors told her she was lucky not to be paralysed.

“I realised that you can’t take life for granted and really do have to make the most of every opportunity,” Michaelee says.

“Which is why I put myself into the Portfolio Model search and say yes to every gig/do all the castings that I can!”

But that wasn’t to be the last of the daredevil’s injuries! “In early 2018 I decided it was a great idea to skateboard down a paved hill in Blenheim!” she laughs.

“This ended with me once again waking up in hospital. At the time they only did an ultrasound to check if I’d fractured my skull, but there was so much blood they couldn’t see anything!”

“I actually still remember the look on the lady’s face coming out and saying that the specialist needed to talk about something but then coming out again saying they’ll send it to my GP instead,” Michaelee says.

She had already seen a neurologist in after her 2015 surfing accident and was concerned about wasting the doctor’s time when she was called in the following day. “But this time she said ‘it’s actually not good news, they’ve found a cranial tumour’.”

Two years ago she had a craniotomy to remove the tumour. “This meant I had to leave the New Zealand Institute of Sport (NZIS), I had to pull out of my touch Canterbury team going to nationals, I wasn’t allowed to play rugby, I was unable to do anything related with modelling and I lost all my muscle/general strength,” she says.

“I was constantly tired for months, could not stand noise and was unable to eat. I’m a very active person so, as anyone would be, I was gutted. Especially because at the time I was so fit both mentally and physically; feeling like I had to start from scratch was tough.”

After her operation, Michaelee’s right eye was permanently looking right out to the side because the tumour was putting pressure on her orbit.

Then, when the part behind her orbit was removed, it lost its support and there was a risk that her eye would not be able to re-adjust itself.

Now she says one eye protrudes out more than the other.

“This used to make me self-conscious but I’ve learned so, so much since I first began modelling that I now take no notice of it and just enjoy the moment rather than focusing on those thoughts at the back of my mind!” she says in true Michaelee fashion.

There is also a distinctive shape on her forehead from the surgery. “I’m constantly getting asked if I’ve hit my head, but it’s actually my bone! I could get filler put in to make my forehead symmetrical if I wanted/needed to but I love the way I am!

“Every time I look in the mirror I smile because it’s such a great reminder of how far I’ve come and what I’ve achieved!

You can decide to be a patient, think the worst and ask for sympathy but, for me, there’s no point drowning yourself in sorrow.

Regular MRI scans and multiple tests are all a part of my current journey now, so the best remedy by far is to stay positive and set your mind towards something you’re passionate about!”

Michaelee is now enjoying the lucrative opportunities coming her way with Portfolio and recent bookings include a television commercial for an international client and a New Zealand fashion label based in Christchurch.

“Michaelee is quite a hard case with a personality that is larger than life,” Mel Radford-Brown says.

“Michaelee is one of those beautiful girls, inside and out, who truly sparkles and leaves an impact on everyone she meets, she is a very special girl, and without a doubt, has been ‘one to watch’ with us.”