When it comes to kittens, cute and adorable as they are, it’s good to keep in mind that old adage about curiosity killing the cat. Just like human babies, kittens are curious about the world around them and as they grow and gain in strength, it’s all too easy for them to get into trouble with eating things that, though satisfying their curiosity, might prove very harmful in the long run. 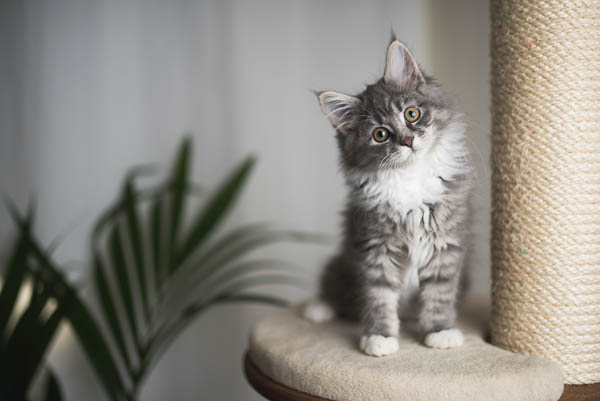 Such was the case with Shadow, a 12-week-old kitten who presented at Ourvets Parklands one morning having vomited up a pom-pom tassel the night before. She had since vomited several times and seemed lethargic, though she was still keen to eat.

An x-ray was taken, which showed that Shadow had something obstructing her gut. The situation necessitated surgery as soon as possible. Shadow’s stomach was opened and two hair-ties were removed, however there was another pom-pom tassel attached to them, extending down into her intestine. The intestines were trying so hard to pass the tassel that they had telescoped in on themselves. This piece of gut had to be removed, along with the tassel.

All up, this surgery took three hours, then she went into recovery. If the surgery had been delayed by even one day, Shadow could have died, but her mum was very diligent and brought her in at the first sign of trouble.

Veterinarian Alice Finch, who performed the operation, says that it pays to keep a vigilant eye on young animals. If they do present with sudden vomiting, even if they’re still keen to eat, the owner should get them checked out as soon as possible as it might be a very serious problem which could quickly escalate into a potentially life-threatening situation.

One month on and Alice says Shadow has made an excellent recovery. “It’s as if nothing happened; she was bright and playful, and was even attacking my knuckles!”

Find Ourvets Parklands at 438 Mairehau Road and phone 03 383 2233. For more information on Ourvets, visit www.ourvets.co.nz or find them on Facebook: Ourvets@ourvets.christchurch.