The SUV is king of the new car market, so is the five-door family hatch a thing of the past? Not so, according to Mazda. After attending the launch of the seventh generation Mazda3 in Hanmer Springs and sampling two variants of the new hatch in day-to-day driving, the new Mazda3 is the best yet. 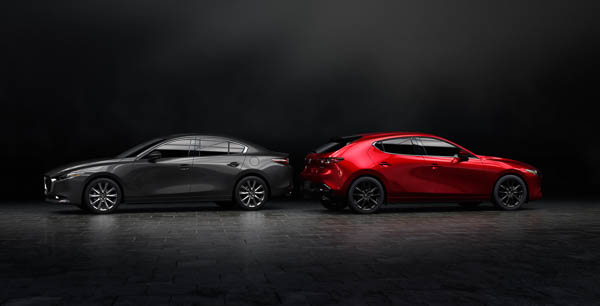 The new Mazda3’s handsome chops draw design cues from the RX Vision and Vision Coupe Concept cars to create a stunning-looking design. Those wrap around headlights and low nose give a sportier look while at the back, minimal styling cues make for a svelte rear.

Inside you are greeted by delightful surroundings. Everything about the new 3 is simplistic and it’s easy to see it as a driver-focused cabin with minimal distractions. The Mazda3 is also very well-equipped. Standard kit includes a crystal-clear Head Up Display, LED Headlights and a 7-inch infotainment system with Apple Car Play and Android Auto Connectivity. Plus, every button or toggle switch is such a joy to use.

Mazda’s i-Activsense system with Lane Departure Warning, Lane Keep Assist, Radar Cruise Control, Smart Braking Support and Driver Attention Alert also makes up the standard package. Move up to the GTX and you get Dual Zone Climate Control and heated seats. Plus, if you go whole hog with the Limited, you can have a sunroof, leather trim and a thumping BOSE stereo system.

On the move in the GSX, that 2.0-litre SKYACTIV engine pulls well, but for me, the one to get is the mid-range GTX. Its 2.5-litre SKYACTIV engine is a real peach and the way it shifts, whether in normal or sport mode, is refined and responsive. You do have to stand on the anchors, but ride comfort is unparalleled for this class.

Another area where the Mazda3 excels is in the bends. You can corner at a great rate, everything hunkers down and bendy bitumen is devoured with ease. In summary, with the new Mazda3, despite the slight decline in the hatch segment, Mazda has given us even more of a reason to buck the trend. It’s just so damn good.