Great Greek Philosopher Hippocrates once said, “Let food be thy medicine and medicine be thy food”. 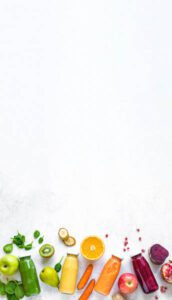 Science has found the proof is in the pudding and many of our tastiest foods are also immunity boosters, that are both affordable and versatile to boot.

A healthy habit is to have these superheroes as pantry staples. Whole, natural, colourful fruits and vegetables all have unique benefits, working in synergy with each other.

PLANT POWER
Kale was and still is king, and is rich in vitamin C. Its cousins in the brassica family, such as cabbage and cavolo nero, are also immunity-boosting powerhouses. Spinach has flavonoids which help ward off colds. Kumara is an antioxidant-rich satisfier, whereas berries such as blackcurrants and elderberries are renown beneficial flu fighters.

SOUP SAVIOURS
Onions and garlic offer allicin for immunity and are a great base for mineral-rich bone broths. Slow boil a chicken or cheap cuts of meat on the bone to extract the goodness – or buy the prepared version. Add in herbs and vegetables for more immune fuel.

WASTE NOT
Use the whole food. For example, grate the zest of a spray-free lemon, before you do the big squeeze – it’s an additional immunity boost. Beetroot leaves are delicious and nutritious in stir fries, salads or added to smoothies.

FROM OUR SHORES
New Zealand harvests its own superfood spirulina – delicious with pineapple and banana in a Shrek-coloured smoothie. Also, our seaweeds, mussels and oysters are high in all-important flu-flighting zinc. And oily fish such as Tuna and Salmon have Vitamin D.

SNEAK IT IN
Add gelatinous all-round healthy chai seeds to desserts or soups. Ground flax seeds sprinkled onto breakfast or salads or smoothies add the anti-inflammatory Omega 3. Toss in the tempeh and mix in the miso to increase the immune system’s antibodies.

NATURALLY SWEET
How lucky are we to live in the land of treasured manuka honey? An anti-viral, it supports the respiratory system, whereas too much sugar suppresses it. So swap to bee-made sweetness for toast and teas.

SPICE IT UP
Use ginger for stir fries, pumpkin-soup pep, or medicinal hot drinks with honey and lemon. Superfood turmeric makes a warming latte or can be used to spice up your porridge, unless you prefer the flavours of cinnamon and nutmeg with their anti-inflammatory benefits..

NOT SO HUMBLE HERBS
Herbs are medicinal powerhouses. Thyme contains thymol – which is wonderful for the respiratory system. Oregano too, has anti-viral properties, so liberally add herbs for medicinal magic.

PREBIOTICS
Healthful sauerkraut and kimchi are piquant sidekicks on the dinner plate. Immunity starts in the gut, so prepare an army of good bacteria.

SWEET AND SOUR
Citrus fruits contain vitamin C, an essential micronutrient which contributes to the improved health of your immune system. Because our bodies cannot produce nor store vitamin C, it’s important we pack it into our diets wherever we can!

Now taking its rightful place in the global spotlight as a ‘cannonball of goodness’, the humble blackcurrant was once known mainly for its high vitamin C values and as the basis of the free wartime children’s drink, Ribena. Turns out, vitamin C was only a small part of blackcurrants’ superpowers.

The nutrient is a neuropeptide called cyclic Glycine-Proline (cGP).

When available to the body in high enough quantities, cGP regulates the availability of an essential hormone called Insulin-like Growth Factor-1 (IGF-1).

Research shows our levels of cGP decline as we age.

If cGP is in short supply, then IGF-1 cannot function sufficiently, and neuro-degenerative illnesses are more likely to occur and be severe.

Sufferers of Parkinson’s disorders and stroke have been observed to have low levels of cGP.

Administering cGP to stroke patients within 12 to 48 hours after a stroke greatly reduces brain damage and speeds up recovery.

Our bodies’ need for cGP is beyond dispute, with benefits for all ages, from babies in utero, to infants, children and adults.

North Canterbury’s own Vitality NZ has captured cGP from blackcurrants in capsule form and, for obvious reasons, named it Brain Shield™.

Director David Eder is one of the most long-standing growers of blackcurrants in New Zealand, while Managing Director Jim Grierson, an agronomist with 38 years in the blackcurrant industry, knew there was something special about the health benefits of NZ blackcurrants.

“We know what goes into Brain Shield and it is in a very natural form,” Jim says.

The blackcurrants are grown, processed and made into the capsules here in Canterbury.

“Brian Shield delivers an average daily dose of cGP via your brain signalling pathways and whole of body function. New Zealand blackcurrants are truly a superfruit when you understand the benefits you get from them,” David says.

Brain Shield is the only product in the world marketed with cGP under a full Novel Patent.

“There is no pharmaceutical equivalent or alternative, it is unique to the blackcurrant species,” Jim says.

“Each capsule delivers an average daily dose and it is very safe – you cannot overdose,” David adds.

Catherine and Alex are the owners of The Little Bone Broth Company, which came to commercial fruition at the beginning of March.

While they both have a passion for fitness and wellbeing (and bone broth it seems…!), Alex is a kick-ass cook with a passion for making food taste good naturally.
This clever company hand makes and sells a range of collagen and nutrient-rich bone broth. Current flavors include the ever-popular Chicken and Beef Broths, the specialty Pork Broth and the weekly changing Seasonal Vege Broth, (vegetarian/vegan). All the ingredients are sourced from within a kilometer of Cat and Alex’s Richmond home, and they only produce a small amount each week in order to keep the product 100 percent, true to its original recipe, taste and quality.
The broth cooks slowly for up to three days, allowing all the goodness to come out of the bones and veges. Seasoned to taste using pink Himalayan salt, it’s sold in glass jars at the Christchurch Farmers Markets and, to encourage reuse of the jars, Cat and Alex offer a discount on their customers’ next purchase.
The benefits of bone broth include immune system support, improved gut health, stress and anxiety relief; it’s a baby superfood, brain food for kids, supports fertility and pregnancy health and it’s an anti-aging beauty tonic. Alex pours his heart and soul into each batch he makes, and is blown away each week at the market when people try a hot sample and tell him they think it’s amazing!

When someone suggests wrapping your laughing gear around the newest culinary powerhouse ‘drinkable soup’ you’d be well within your rights to look at them like they’re a little bit bonkers for stating the obvious. The concept of drinkable soup seems pretty standard, right? Wrong. 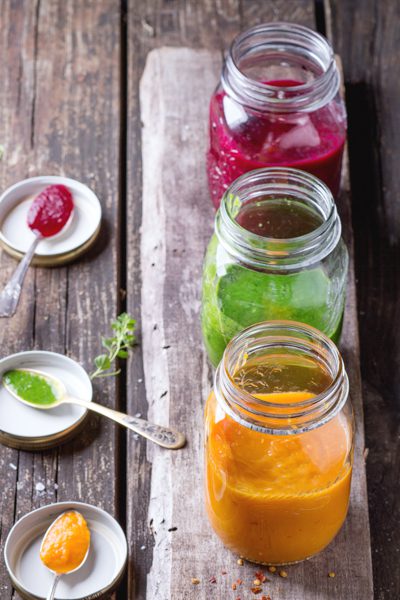 Drinkable soup is flipping the status quo on its head. The new foodie favourite dominating the headlines has rendered spoons redundant. Just your lips or a straw are all that’s required to indulge. Dubbed the new ‘juice’, drinkable soups can be made from scratch at home and enjoyed cold or hot on the go, or alternatively, purchased from the cafes or grocers who are supporting this new wellness warrior and its super powers. Superfood power that is.
Drinkable soups are packing a super healthy punch with all their yummy ingredients – veggies galore, plus all the other goodies like kale, hemp seeds, ginger and turmeric. Marrying the best of both worlds – convenience and nutrition – they’ve moved out of the margins and into the mainstream.
Bottoms up!