Lisa Tamati has lived her life beating the odds, never letting anything stand in her way. 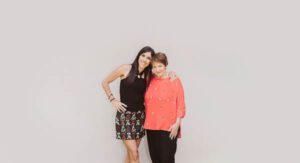 So when an aneurysm and stroke left Lisa’s mum Isobel with severe brain damage at the age of 74, the ultramarathon runner approached rehabilitation in the same way she approached some of the world’s most gruelling races.

She tells Melinda Collins about the unrelentless love for her mum which saw her beat the odds once again.

Lisa Tamati never pegged herself as a runner.

An asthmatic her whole life, she simply didn’t have the lung capacity.

But she came from a sporty family and wanted to make her dad proud, so she trained instead, as a gymnast.

“I failed at that miserably,” she laughs. “I wanted to do something epic, I just didn’t have the build for gymnastics – I was too tall and too muscular.”

But that would all change when a young Austrian athlete was hit by an avalanche and Lisa’s mum Isobel did what many Kiwi mums would do… she invited him home. “I followed him around the world and we had lots of adventures,” Lisa says.

Those adventures involved running, walking, biking and paddling their way across thousands of miles of Europe, Scandinavia and Africa before taking on the ultimate challenge—an unassisted 250km crossing of the Libyan Desert, Lisa carrying 35kg of her own food, equipment and water.

When the relationship ended after becoming abusive, Lisa had lost her confidence and self-esteem. “I was lost, I didn’t know what I wanted… I wanted to keep having adventures, but I didn’t have anyone to have them with.”

So when she heard about the Marathon des Sables, a seven-day, 240km ultramarathon across the Sahara Desert described as the toughest foot race on earth, it was just the challenge she wanted to sink her teeth into.

“I came out in the top 10 and I was like, holy crap I’m not bad at the really long stuff! That started the ball rolling and I just wanted more and more of that,” she says.

And more of that she got, conquering some of the most gruelling challenges on earth. She learnt about pushing past barriers, overcoming obstacles, fighting back after injury and breaking goals into bite-sized pieces. “You learn resilience, that not everything goes your way and if you get knocked down, you have to get back up.

“You learn about persisting through the uncomfortable times.”

They were life lessons that were invaluable for Lisa when one Saturday morning, her mum had an aneurysm completely out of the blue.

Isobel was in and out of a coma for three weeks. When she awoke, she had severe brain damage; she couldn’t communicate and had no memory of who she was. According to doctors, there was no hope.

“She was in a little bit better than a vegetative state,. It was like the computer was on, but there was no software installed.”

Soon after changing hospitals, Isobel’s condition started to deteriorate. She was going downhill and she was heading there fast. That’s when the cogs started turning over for Lisa. “I started to think hang on, she was on oxygen, now she’s not and she’s getting worse.”

Having done a lot of endurance work at altitude, Lisa understood the ramifications of a lack of oxygen. She pointed out her mum’s symptoms to the doctors and her concerns were pushed aside.

When she suggested a sleep apnoea test, they said no. But Lisa was familiar with hurdles. “I went over the top of their heads with a private consultation! The test came back as severe sleep apnoea.”

Her mum’s brain wasn’t getting the oxygen it needed to heal. For athletes like Lisa, specialised oxygen tents help them adjust to low-oxygen conditions; Lisa came across the concept of hyperbaric oxygen therapy (HBOT); same concept, different application.

Used most famously for divers recovering from ‘the bends’, HBOT involves breathing concentrated oxygen in a pressurised chamber. The treatment has been known to dramatically and permanently improve symptoms of chronic traumatic brain injury (TBI) months or even years after the original head injury, among other ailments it is used for.

There are more than 60 years of clinical studies supporting its use and hundreds of hospitals around the world utilising it. In New Zealand, HBOT is used in Auckland and Christchurch, but only for gangrene, diabetic ulcers, burns and compression injuries, but not for brain injuries. Lisa was determined to get her mum on this treatment.

After three months in hospital, she finally won the battle to take Isobel home. Miraculously, she secured the use of a hyperbaric oxygen chamber and immediately started 1.5-hour sessions a day, five days a week. “After 33 sessions she started to wake up, respond and try to communicate!”

And just as soon as they started seeing results, the chamber was required for a contract and they lost access. But then Lisa never was one to give up! She mortgaged the house, got her own chamber and had it installed, and Isobel continued to improve, slowly, but surely.

Throughout the journey, Lisa studied like mad, everything from functional neurology and Nootropics, to epigenetics and functional genomics.

She changed her mum’s diet to essentially a keto diet, with high good fats and green veges, and put in place an eight-hour a day programme of training which changed constantly to work around neural fatigue.

Isobel had to learn everything she had once known from scratch; from how to chew food properly, to how to read and write.

After four years, Isobel is completely healed. Other than a slight limp, there is no sign of the brain damage she suffered. From not being expected to live out the month, Isobel has her full drivers’ license back! “At the time she couldn’t even driver her own wheelchair,” Lisa laughs.

“My brothers thought I was insane!”

Lisa has written about the journey. Relentless is the story about how Lisa refused to accept the words of the medical fraternity and instead decided that she was going to get her mother back or die trying. It covers the physical – the therapies, protocols and doctors she used – but also the mental – the attitude and mindset that is required to take on a fight this big. It’s available on the website below or in bookstores now.

“It will resonate with athletes, to those with medical challenges, to anyone who wants to understand high performance and how to get the best out of themselves,” she says.

“I want other people to learn that when everything looks bleak, sometimes there is hope, if you’re willing to put in the work.”

When you’ve driven every Mitsubishi over the course of a year, one thing seems to be constant – simplicity, despite this simplicity, every vehicle from the Triton to the Pajero is packed to the brim with everything you need from a modern vehicle. 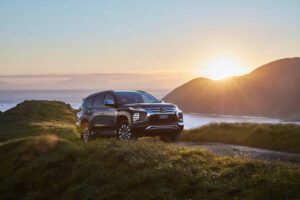 The Pajero Sport is no different.

This seven-seater has loads of room, quite the step up from its predecessor and that extends upwards, with my son Tom and I both gasping as we drove into the second floor of the Westfield Riccarton mall carparking building, convinced we were going to scrape the roof!

The Pajero Sports 20 MY’s power tail gate is always an asset and great for loading groceries, sports gear or school kit on a wet day.

A cool feature is you can use a smart phone app to open it too!

That same app can also be used as a vehicle locater, operation assist and vehicle information device.

How many times do you forget where you’re parked at said car park?

Front heated seats are good on the drive on the chilly mornings as well.

The new grille design gives the front end a little bit more polish and the lines on the vehicle have changed too.

It’s the wheel clearance on it that gives it such height and I’ll be honest, I took it for a little off-road test and it performed well, both in 4-wheel drive and 2-wheel drive.

There’s a 220-volt power plug in the back which means that if you take it off-road, you can power an electric pump for air beds or a little cooker or… whatever.

The 8-inch multi-functional display is adaptable for what you want to prioritise and, as always, Apple Car Play makes it easy on the iPhone user.

The sensor technology is also great, with a reversing camera and three-dimensional display so you know exactly where your car is in relation to curbs and obstacles.

There’s nothing worse than damaging your precious alloy wheels on curbs and this function will help you avoid this.

You’ll find 135kW of power and a whopping 437 Nm of torque on this beast, so towing the boat won’t ever be a problem.

Mitsubishi has a real knack for refining all the necessities into a simple but elegant package.

I could wax lyrical about the little details about the Pajero Sport but at the end of day, Mitsubishi really does have a version of the SUV/Utility vehicle for everyone.

What do YOU need?