In winning the brief to design the award-winning Dark Sky Project, Sheppard and Rout have once again excelled.

“The clear night skies above Takapō are iconic,” says Jasper.

“And this building contributes to the re-orientation of Takapō towards its setting and dramatic mountain backdrop, rather than the highway.”

The large central astronomy dome is the dominant focus from a distance, acting as a marker when arriving into Takapō from the south, heralding it as a centre for the large dark sky reserve of the greater Mackenzie region.

The result of a detailed process of consultation, discussion and negotiation with a number of parties including Ngāi Tahu and local rūnanga, the building is striking, wholly fit for purpose, and has cultural meanings intrinsic at all levels: from form and structure through to the experience area itself.

2020 NZIA Canterbury Awards Judges gave it a rapturous citation: a “bold and brave insertion into the traditional context of Takapō – an assertive dissent from vernacular orthodoxy – and the result is a successful convergence of horizontal and vertical elements: Rangi and Papa in harmony.”

And that the project reveals “a clever interweaving of Māori mythology and scientific discovery through its multi-layered spaces. The Brashear telescope adds a suggestion of steampunk, a quirky twist to the simple forms elsewhere.”

An architect’s owned-designed home becomes an expression of their beliefs and ideals, and this is especially true of the new home of Tim Dagg, Architect at Sheppard and Rout. 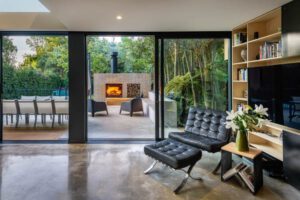 Tim and his family lived on site previously and, for Tim, the context of the site and orientation of the home are always key to the design.

This held true for his own build: the existing north-facing landscape with its mature native plantings, seated terrace and swimming pool have been retained.

With a school and railway line as neighbours, there is no danger of being built out, so Tim designed the entire north end of the house in glass to bring the gorgeous outlook inside.

Materials are low maintenance in natural and neutral hues.

Roof and exterior walls are clad in coloursteel, with some easy access areas in stretcher bond brick and in a light stained cedar.

“Our roofer was awarded Roofer of the Year at the Coloursteel Roofing Awards. The job required discussion between the foreman and me and the roofer, and his workmanship and expertise has produced an outstanding result.”

The glass wall is protected by a 1.5m roof overhang to reduce solar gain. 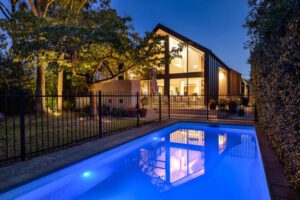