When it comes to the perfect morning tea, specialist bakery Gorgeous Food’s JoAnne Fryer says the humble scone is right up there in the popularity stakes. One that is frequently asked for is the cheese and chive scone. 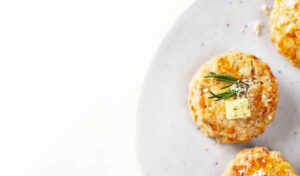 “If you’re lucky enough to be passing by our doors around 6am, you can get them straight from the oven,” JoAnne says.

Other firm favourites with customers are tasty savouries from the pie warmer; freshly cut sandwiches; slices cut into dainty bite sized pieces to pop in the mouth; and there’s a posse of muffin-mad folk out there who can’t get enough of the Texan muffin with plump blueberries or raspberry and white chocolate.

If you can’t make it to Gorgeous Food for the most scrumptious morning tea ever, don’t despair, for JoAnne has very kindly shared her recipe of Cheese and Chive scones with us. Yay!

Mix together and add enough milk (approx. 2 cups) to make a firm batter. Drop large spoonfuls close together onto an oven tray lined with baking paper.
Sprinkle with paprika, parmesan and grated cheese. Bake in preheated oven at 200°C for 10 to 15 minutse until golden brown and cooked through. 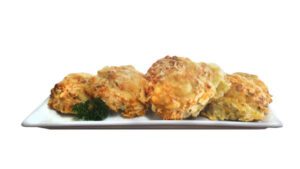 Place the chicken in a large mixing bowl with 2 tablespoons of oil, 1 teaspoon of cumin, 1½ teaspoons of sumac, the cinnamon, allspice, 1 teaspoon of salt and a good grind of black pepper. Mix well to combine, then spread out on a parchment-lined baking tray. Roast until the chicken is cooked through. This will take about 30 minutes if starting with breasts and up to 45 minutes if starting with the whole chicken, quartered. Remove from the oven and set aside. Don’t discard any juices which have collected in the tray.

Meanwhile, put 2 tablespoons of oil into a large sauté pan, about 24cm, and place on a medium heat. Add the pine nuts and cook for about 2–3 minutes, stirring constantly, until the nuts are golden brown. Transfer to a bowl lined with kitchen paper (leaving the oil behind in the pan) and set aside. Add the remaining 60ml of oil to the pan, along with the onions and ¾ teaspoon of salt. Return to a medium heat for about 15 minutes, stirring from time to time, until the onions are completely soft and pale golden but not caramelised. Add 2 tablespoons of sumac, the remaining 2 teaspoons of cumin and a grind of black pepper and mix through, until the onions are completely coated. Remove from the heat and set aside.

When ready to assemble the dish, set the oven to a grill setting and slice or tear the bread into quarters or sixths. Place them under the grill for about 2–3 minutes, to crisp up, then arrange them on a large platter. Top the bread with half the onions, followed by all the chicken and any chicken juices left in the tray. Either keep each piece of chicken as it is or else roughly shred it as you plate up, into two or three large chunks. Spoon the remaining onions over the top and sprinkle with the pine nuts, parsley, 1½ teaspoons of sumac and a final drizzle of olive oil. Serve at once, with the yoghurt and a wedge of lemon alongside. 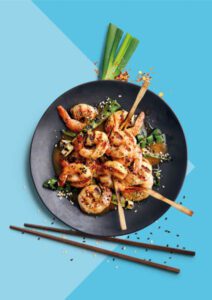 In a large bowl, whisk together the butter, miso, mirin, sake and ginger, mixing well. Add in the prawns and marinate for 10 minutes.
Trim and portion the spring onion into 50mm batons, these can be grilled at the same time with the prawns.

FLAT PLATE BBQ GRILL: Heat your grill on medium high heat. Grill the prawns on each side for approximately 1 to 1.5 minutes or until cooked through.

COOKING ON STOVE: Heat your grill pan over a medium high heat. Add the prawns and grill each side for 1 to 1.5 minutes or until cooked through.

COOKING IN GRILL OVEN: Turn your oven to grill and move the rack to just below heating element. Using a suitable grill or baking tray add the prawns. Grill for 1 to 1.5 minutes each side or until cooked through.

NOTE: Grill the spring onion at the same time with the prawns.

We can’t think of a better family Sunday lunch or dinner than roast beef with all the trimmings – Yorkshire puddings, rich gravy and crispy roast potatoes. 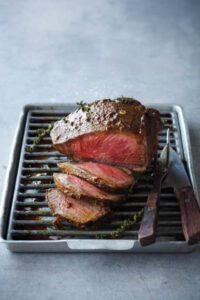 BEEF
Combine all of the spice mix ingredients together in a small bowl. Rub over the beef bolar and place on a wire tray on a baking dish. Reduce the oven temperature to 200°C and place in the oven to roast for 40-45 minutes for medium-rare beef.
Remove beef from the oven and place on a warmed plate, cover loosely with foil and a clean tea towel and leave to rest.

CRISPY ROAST POTATOES
Place potatoes in a saucepan of salted water and bring to the boil. Reduce the heat and allow to simmer for 5-8 minutes, just so they are slightly soft around the edges. Drain and place saucepan back over the heat. Shake saucepan to dry off potatoes. Score the surface of each with a fork to scruff them up.
Place oil and butter into a roasting dish and place in oven to heat. Add potatoes, tossing well so that every surface is covered. Roast for 45 minutes at least until thoroughly golden and crisp. Sprinkle with a little salt before serving.

TO SERVE
Serve slices of beef with the potatoes, peas, gravy and Yorkshire puddings if you wish.

I feel like all too often we think of apples merely as the base of a dessert, to which we add berries or other more vibrant fruits. Here I wanted to celebrate the humble apple in all its glory, adding only a little lemon and thyme to accentuate, not cover-up, the beautiful natural sweet and sour flavour of in-season apples. 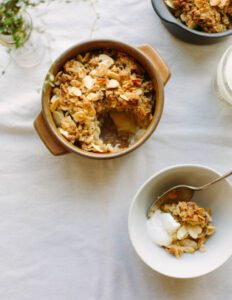 For a dairy-free or vegan version, use 60ml (1/4 cup) solid virgin coconut oil, plus a pinch of fine sea salt in place of the butter. The results are not quite the same, but still yum.

Any leftovers are lovely eaten cold with yoghurt for breakfast, or warmed through if you have the time and/or can be bothered!

If like me, you like to plan ahead to make life easier, double up the crumble recipe and freeze half in a zip-lock bag for later use.

Preheat oven to 180C (350F). Place sliced apples and lemon zest in a saucepan, add a little splash of water, cover with a lid and bring to the boil over high heat. Reduce to a simmer and cook for 8 to 10 minutes, stirring occasionally until apple is tender. Transfer to a two-litre ovenproof dish (or four to six smaller ones if you’d like to make individual crumbles).

Place sliced almonds in a dry frying pan over medium-high heat and cook 3 to 4 minutes, stirring often until lightly toasted. Remove from the heat and set aside. Put rice flour, ground almonds and butter in a bowl. Use your hands to rub in the butter until it resembles coarse breadcrumbs (it will feel a little more moist than regular crumble at this stage). Stir in sugar, toasted almonds and thyme. Scatter some crumble mixture over the apples, then squeeze the rest of the crumble together with your hands to form large clumps before gently scattering on top.

Bake for 40 to 45 minutes for one large dish, or 30 to 35 minutes for smaller ones, until the top is golden brown and the filling bubbling up and over the crumble in places. Serve warm with vanilla ice cream, vanilla custard or plain yoghurt.

Slide into dinner time with these divine pulled pork sliders, slow-cooked to perfection! 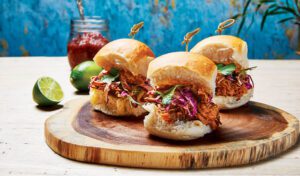 If a warming winter dessert is on the culinary cards for you, make it this outstanding Peach Cobbler from Joanna Gaines’ latest book, Magnolia Table. 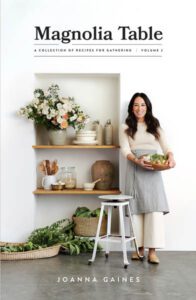 There’s nothing like a classic pork stir fry in your culinary repertoire. It’s a simple, no-fuss recipe that the whole family will love. 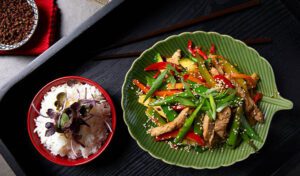 Moroccan flavours are the ultimate way to add flavour to chicken and we’ve got a nice, easy recipe for you to follow. 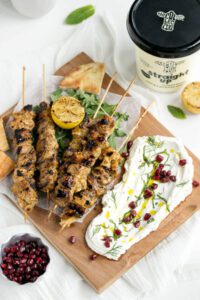 Sometimes you want to get a little creative in the kitchen, so why not take the opportunity to reinvent a classic like roast carrots, in a clever culinary way, using The Collective’s Natural Kefir Yoghurt as the hero. 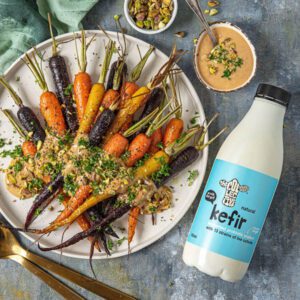