The central city is becoming a hotspot for local talent to realise their creative dreams, with historic buildings providing the inspirational canvas. Such dreams have been realised in the CBD’s grand Old Government Building, which opened in 1913 and now O.G.B is a perfect way to get a taste of old Christchurch, with staff in suspenders and newsboy caps.

Owner Nick Inkster talks about his motivation for setting it up, his plans for expansion and the city’s transformation.

What were you doing before you set up O.G.B?
I’m a carpenter by trade and was working in Western Australia’s oil and gas industry for seven years. After the earthquakes [of 2010 and 2011] I wanted to come home and give back by spending my hard-earned cash on something special for my home town of Christchurch.

What was the motivation behind opening O.G.B?
From the age of 21 my father told me he could see me building my own bar one day. I loved the concept of a bar where people meet, talk and socialise and where the bartender knows your name. I love old buildings so after the earthquakes I had my eye on one location in the city – the Old Government Building. 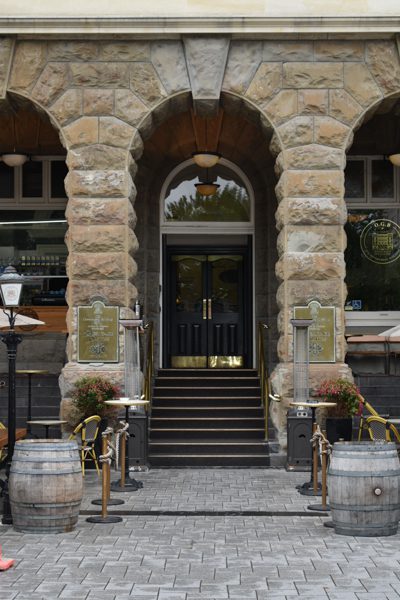 Can you tell us a little bit about your other projects, such as the restaurant opposite the bar and Frederick Woodwards Barber Shop?
Frederick Woodward was a local barber tobacconist who had Woodwards & Co back in the late 1800s/early 1900s in Cathedral Square. I’ve honoured him with a timeless, classic-style barber shop. The restaurant will undergo a Gatsby-style fit out in good time but for now we have a beautiful big grand piano that we have pianists play on every weekend.

Parlour is opening next to the O.G.B soon – what’s the vibe going to be there?
Parlour will be the best room in the house, the house being the Old Government Building. It will be a space to speak, bringing people together to generate debate and discussion. It will be where conversation is had, where the ladies can go to talk about the gentlemen.

Is our city different now to what you remember growing up?
It is very different but I’m excited to see it become a liveable city with farmers’ markets, apartments, residents and an awesome hospitality offering. I can’t wait to build more projects for the people of Christchurch.

‘Beautiful character and heritage spaces in central Christchurch’. That’s the tagline. But in reality, Box 112’s day to day is much grittier. Think clearing out an old welder’s workshop, strengthening an abandoned heritage building and retrofitting a former grocery distribution centre.

The company, which buys, fits out and leases buildings in Christchurch, is all about tackling the city’s ‘too hard basket’ when it comes to development, says partner James Stringer. “Buildings are not just spaces, they have memories attached to them.”
Stringer joined Box 112 in 2016 after his colleagues Sam Rofe and Rob Farrell set it up a year prior. As a director of the Christchurch Heritage Trust, he was excited to steer away from new builds and tackle projects others might overlook.
“When you go overseas to any major city, you’ll often find the real soul of the city is always a few streets back – it’s the places the tourists hunt out, it’s the places the locals go.
“We can’t go down the road of a utopian city, we have to remember that grit and intrigue is what makes a city. Pockets, things for everyone.”
Stringer says he, Rofe and Farrell look at some of Christchurch’s less-than-desirable buildings, including those historically used for industrial purposes. “We hunt buildings that are really well located and have a story. Some of them are pretty tricky, they’re often tied up in insurance disputes. We really admire people who have held on to them for so long,” he says.
Box 112 finds investors for each development and co-owns the buildings. Its portfolio includes a rubber mouldings factory which is now a coffee shop and roastery (The Anchorage) and a grocery distribution centre turned bar and eatery (Welles Street).
The company is also repurposing six former industrial buildings in Welles Street. The complex, which will be home to a mix of artisan businesses, is named The Welder after another long-standing tenant. Stringer says buildings from the 1950s and 1960s are just as important to Christchurch’s history as those marked with the heritage stamp.

“The easy option is to bulldoze them and start again, but as the city grows and fills in we’ll just never get an opportunity to get these kinds of buildings back. They are actually going to be our future heritage buildings – as crazy as it sounds. They will be very iconic amongst the sea of glass.”
The Anchorage, Welles Street, Supreme Supreme and The Welder are all part of an area of town Box 112 has branded ‘South Town’, “an area of the city that has always had more grit and intrigue to it,” Stringer says.
Box 112 is also developing Christchurch’s five-storey former Public Trust Building, which has been awarded a $1.9m heritage grant from the Christchurch City Council.
“We are always looking to partner with interesting local and national businesses that are looking for an authentic and unique space to leverage off.”

The inner city’s trams are iconic Christchurch at its best. But the latest addition to Christchurch Attractions’ eye-catching fleet is Tram 1888 – a handsome blue R-class with a very colourful life. 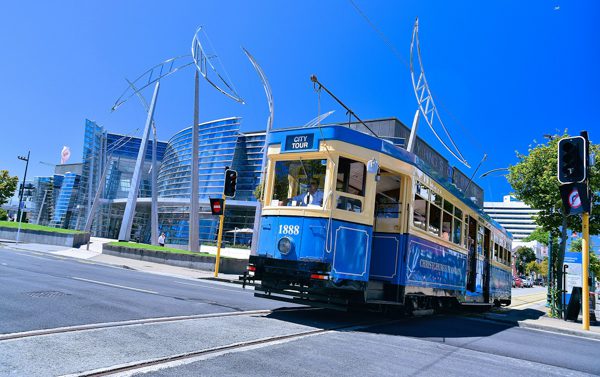 Built in 1934 and leased from the Sydney Tramway Museum, Tram 1888 started life at the Fort Macquarie Depot – now the location of the Sydney Opera House. It was used on the city’s Watson’s Bay line until the Fort Macquarie Depot closed in 1955 and even received air raid precaution modifications to minimise window damage during World War II.
From 1955 to 1960, the tram was shuffled around Sydney depots until the body was written off and sold to a tobacco farmer in New South Wales, where it accommodated seasonal farm hands for 24 years until 1984, when the farmer donated the battered tram body to a local council interested in its preservation.
The restoration involved removing hundreds of nails that had been hammered into the inside of the body for coat hooks, lantern holders and clotheslines. The tram was furnished with original R-class seats before being put on display in Bondi Junction for five years. In 1993, it entered storage before the Sydney Tramway Museum took responsibility for it in 2000.
The museum shipped Tram 1888 to Bendigo, where it was restored to an operational level. In subsequent years, it was put on display in Melbourne, repainted and used on a tour around Melbourne’s tram system. In 2009, Tram 1888 was leased to Auckland’s Museum of Transport and Technology, before being leased to Christchurch Attractions late last year.