Who would have thought a love of dressing old-school paper dolls in the early ’50s would transform into an award-winning design at the World of Wearable Arts Awards. 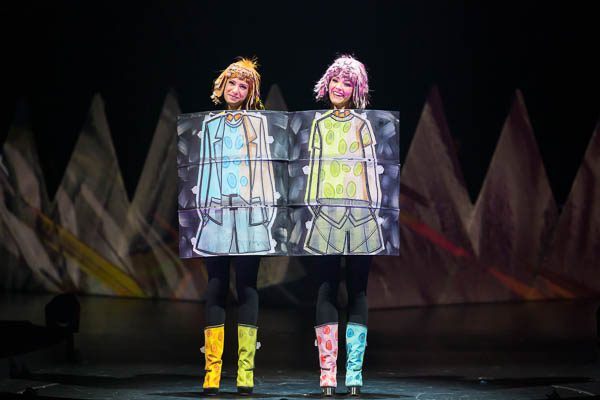 Placing second for her Dress-up Dolls entry in the Transform section of this year’s competition, Meg Latham coincidently grew up where WOW originated 31 years ago – Spring Grove.

Meg won her first award amongst competition from 115 finalists and entries from 43 countries. She first entered in 1994, and then intermittently until 2003, before returning in 2018 with ‘Titty Tote’ – a handbag bra conjured from recycled leather and zips, with handles that became bra straps.

As a young girl, she created everything from scratch from what she could find.

“I loved paper dolls, but I preferred to design my own outfits, other than the ones they came with.”

Her mum was a keen sewer, and her dad an inventive jack of all trades. Little Meg created alongside him, even using a welding and soldering gun. Twin-sister Fleur Stewart, also an artist, also collaborated with two of her WOW designs over the years. “We were a self-contained family, having fun, and making things.”

Although spending most of her career in Nelson working as a professional ceramic artist, Meg now calls Motueka home. Life took on a new direction when Meg began creating mixed-media portraiture. The craft utilises her digital imagery and graphic design skills attained from draughting and cartography training.

“Instead of old recycled materials, I use materials like plastics and resins to lay over digital imagery. Many are offcuts and fabric samples a builder or decorator would use – otherwise destined for the skip.

In September, two models became Meg’s Dress-up Dolls – magically performing a costume change on the WOW stage, from blues and pinks to green, yellow and orange.

“I had actually been planning the Dress-up Dolls design over the last five years. Construction of the garments only took four weeks, but there was an awful lot of time put into how it all works – from the technicalities and ensuring the models are comfortable and the outfits durable.

“The dresses were created from canvas-covered polyethylene plastic cylinders that kind of folded into themselves. The costume changes transformed, just like opening the pages of a book. It’s almost trickery – hard to describe and explain it!”

Although Meg recognises the high-tech world that lends the wow-factor to the show, such as lasercuts and 3D printing, she embraces technology on a modest “low-tech” level.

“Hands-on construction is how I like to put it,” she says. “The best of the both worlds.”

Meg is amazed there has been very little repetition of ideas in the years of the event. “There’s a fine line between fancy dress and wearable art. I have to constantly think about the direction I’m taking. I also like my garments to have an element of fun and lightness.”

Already well into planning her creation for next year, Meg says it will remain top secret until the big reveal on stage in 2020 if successful.

“I just love the process,” she reiterates. “I almost don’t want it to end – I savour every moment. Seeing it finally come to life on stage is just a bonus.”

Meg Latham’s Dress-up Dolls are on display at WOW Museum in Nelson. Her unique portraits are also showcased at Nelson’s Parker Gallery.

Moochi is your everyday luxury, from off-duty essentials to coveted designer pieces. With contemporary design and classic, effortless style, moochi is all about feeling confident and looking chic.

We caught up with founder Kellie Taylor about her design inspiration and her top style tips for the coming season.

Can you tell us about how moochi came to be?
I trained in fashion at what is now Massey in Wellington. I worked for successful New Zealand labels before taking an OE with Chris (husband) and when we came back we had a few business ideas drawn up; moochi was one of them. Originally I thought it would be a wholesale label, selling in to other stores but retail became a better idea for us. We now have 14 stores, including online.

How did you come up with the name ‘moochi’?
It really was to describe the feeling of being relaxed and comfortable; clothes to mooch in. And then it grew to have its own meaning over time – this original meaning simply doesn’t cover what we do now. The brand has grown as the customer base has, adding in lines for many different areas of our lives, but still I seek to deliver products that will create ease for the wearer.

Where do you draw your design inspiration from?
Firstly from what we have done before; we always look back first before we move forward. We do our research on what’s happening globally and also review what our customers have been asking us for. There is so much information – the key is to absorb yourself in it and then close it down and listen to your own voice, then move forward gently. While trends may feel like they change fast, style is very constant and shifts are very subtle.

What are your top style tips for this season?
We have been loving pants for so long but I feel it’s definitely time to wear skirts more and to embrace the dress again. It’s about discovering the proportions and how they work for you. I’m very excited with what we have created for the coming months. I already know what I’ll be wearing for New Years, and at the moment it’s only a sketch!

Can you tell us about your latest moochi ‘Key Piece’ collection and what this collection means to you?
I love releasing these each season as they are a culmination of our best work in many ways. They offer such great ‘value per wear’ as we already know buying them will result in a new instant favourite for the customer.
Ultimately these pieces have the ‘must-have’ tick on them. They are designs we have created over the years, that regardless of seasonal shifts, you can feel confident choosing.

You started moochi simultaneously with making a family, in an industry which is quite all-encompassing. How do you juggle everything?
It all just happened at the same time! Luckily at moochi it’s not about any one person, there are many of us creating, supporting the team and managing the business. To get it done, it takes all of us to be on form. What we do, delivering new designs to the store every week, much of which is made in NZ, is very full on and I am grateful for my team and aware we all need one another. My kids have grown up with a busy working mum – to use your word it’s a juggle and I do my best. Sometimes it’s good enough and sometimes it can get messy. Balance is not my goal, I feel it’s an impossible target. I seek satisfaction in a job done well, be that as a creative and a business owner or as a mum. I am raising cool kids who know that success doesn’t come from luck but hard work.

What’s the most fulfilling part of what you do?
My favourite moments come in fittings when a new design sample comes through and you can see a new favourite has been created. I also love it when we have our full head office team reporting meeting on Monday morning and all departments are firing on all cylinders. I love it when a customer smiles as she steps out of the change room feeling better about herself than when she went in. And I love it when I hear our items had a gasp from the audience at a fashion show or when the team come back from a photo shoot so proud of how it has come together. I love what I do.