Clinical Dental Technician and artist, Richard Greenlees of Lovebite, has returned from a tour of Switzerland, Germany and the UK where he contributed to symposia on the latest technology used in denture creation. 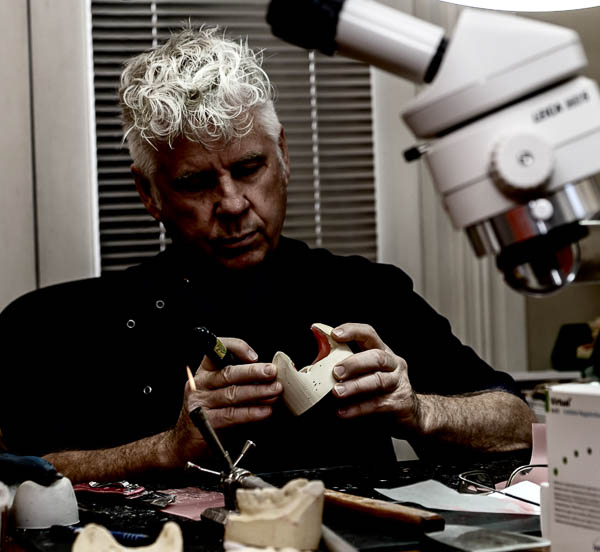 “It has been fascinating,” Richard says, “My main conclusion being that you just can’t surpass a set of dentures completely hand-made and bespoke to their owner”. The drive to computer-generated dentures simply doesn’t replicate Richard’s ability to create a set of dentures indistinguishable from a person’s own teeth. Key to Richard’s stunning results is his passion for studying faces and features. Regarded as gifted by colleagues, Richard has an innate ability to recreate a face as it would be if structured by its natural teeth.

“It is common to be left with a ‘denture face’ after a number of years,” Richard says. “Cheeks collapse and lips thin, distorting the integrity of facial structure.” He finds women often bring their husbands in to get a denture face restored to its original more masculine appearance. Experience plus possessing the eye of a practicing artist enables Richard to visualise how the patient’s face would look at its best authentic self, at its current age.

“The face fascinates me. It shows its owner’s history, illustrates the character and sustains life through its role in eating. Once it is restored there can be quite a dramatic change – patients can look in the mirror and see a younger self looking back. It always moves them and it can take a little time to adjust to this different yet completely authentic self.” Richard’s ‘after shots’ of patients are authentic too, he is strict on no use of stock photos to misrepresent his skill.

The process begins with Richard observing the face, plus getting to know the personality behind it. A technical phase utilises moulds in different ways. Richard’s own-recipe wax is used to create lip stents as tools to reshape the face, helping decide where the teeth will sit, and where to place the teeth in the skull shape. This skilled and thoughtful analysis sets Richard’s work apart.

Fittings occur to ensure the patient and Richard are happy and then the finishing stage can begin. This is a critical element, where Richard’s artistic side comes to the fore. The denture is handmade, incorporating the shape of teeth and gums, tinting and colouring and the character features that make the denture indistinguishable from real teeth are added.

Creation of the dentures occurs in both the clinic and the art studio space at Lovebite, with the whole process in Richard’s hands only. Far from a 9–5’er, Richard sometimes works on a denture in the small hours, unable to put it down. He puts in long hours, but like any creative enterprise, it is not work, “it’s an expression for me, I love it”.

Getting dentures can be a daunting prospect, and the last thing patients want is a generic, or ‘horsey’ smile, says internationally renowned clinical dental technician, Richard Greenlees of Christchurch practice, Lovebite. 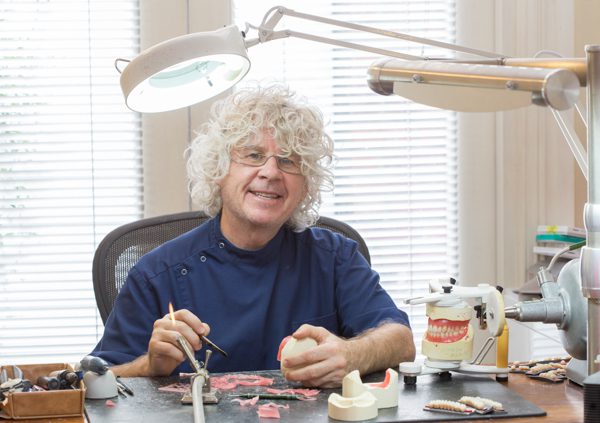 “People get new or replacement dentures for many reasons, but one thing is true for every patient; they want to love the new smile reflected back to them in the mirror and feel confident when they go out into the world.” Richard creates expertly crafted bespoke dentures, which are unique to every patient. “Teeth are as different as fingerprints and vary greatly depending on a person’s age, sex and race. I work one-on-one with patients to create a smile that allows them to feel like themselves again. My dentures also provide the correct support and structure to give them a more youthful appearance.”

As a reference while he works, Richard often uses his patients’ own photographs showing their natural smile. His dentures are like artworks, with each tooth individually crafted with colouring and small nuances to match his patients’ individuality and character.
Not only do Lovebite teeth look real, the whole structure and shape of a patient’s face is transformed with Richard’s top-of-the-line dentures – which feature his signature ‘denture lift’.  “With appropriate facial support, the facial tissues are brought back into the correct position, lips are reformed and beauty is restored,” he says.

It is the interior architecture of a Lovebite denture that helps to create a more youthful appearance by recovering the face and skeletal shape that can be lost after years of wearing old dentures. To achieve these results, Richard has created world-leading techniques, which are now internationally recognised. He is regularly asked to lecture worldwide, and in April was the keynote speaker at the international DTG Symposium in Frankfurt, where he demonstrated his unique methods on a Christchurch patient, flown to Germany by the event organisers.

His vast experience includes 15 years running his own clinic in the prestigious Harley Street, London, where he treated people from all walks of life, from barrow boys to the rich and famous, politicians, actors and musicians. In addition to dentures, Richard also carries out crown and bridge, veneer and implant work, in conjunction with like-minded dental surgeons who complement his creative and aesthetic work.

There is nothing more satisfying for Richard than to see his patients leave the Lovebite studio with a beautiful new smile, and their self-confidence and identity restored.