Christchurch based main contractor Apollo Projects is in the fortunate position of putting broad smiles on the faces of citizens young and old who have been making do or missing out. They do this by bringing much anticipated major sport and recreation centres to fruition in Canterbury. 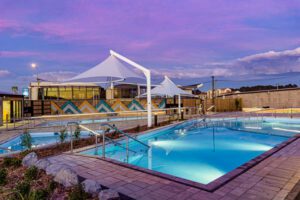 Selwyn District Council has appointed Apollo to build the Foster Park indoor courts, which are currently underway and on track to be completed around April 2021.

The courts’ framework has been installed and work is progressing steadily since restarting under Alert Level 3.

Once completed, they will include eight courts and a 240-metre indoor walking track on the mezzanine level.