Two childhood best buddies from Christchurch have been making music since they were seven. Now their sweet harmonies and lyrics that carry messages teenagers are relating to, have created indie-folk success. 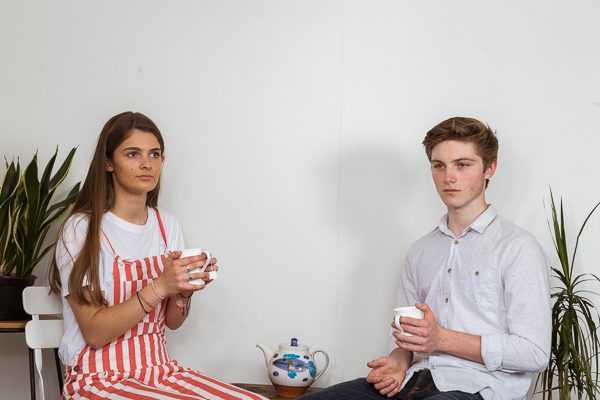 Constellations, Six Dollar Shirt and Oversized Ring are debut singles off their EP released earlier this month. Their EP We Can Only Laugh is so titled because, “We take our music seriously, but we don’t take ourselves too seriously. How can we, we’re only 17 and 18 years old,” Nat Hutton says.

“We have known each other since preschool – he’s my best friend. Our first song together was actually written in tribute to the Christchurch Earthquakes, in 2011.” Jono Stewart came from a choral background and, with his uncle James Reid the lead singer for The Feelers, was surrounded by music. “I get inspiration from whatever I’m listening to.”

Crumbs is the duo’s personal favourite track – “It includes a lot of elements.” They’ve been highly involved in productions with producer Will McGillivray from NOMAD – “a big inspiration”, as is their mentor Sacha Vee from SOLE Music Academy.

Finalists in the past two NZ Rock Quests, they made the top five in 2017. They opened for Jed Parsons here last year and will open for Australian indie folk singer, Michael Dunstan, who plays on 11 April at Blue Smoke in The Tannery. “There will be at least another single out this year – there’s lots we haven’t released yet! We just want to play music – and keep on having fun with it.”

For more information visit www.instagram.com/natandjono/ or find them on Facebook.