There is no denying a huge chunk of Kiwi gearheads love a Chevy, though those wanting a late model Chevrolet had to import one privately, until now. Yes, to fill a gap left by the recently departed Aussie-built Commodore, HSV is selling the Chevrolet Camaro in New Zealand, in right-hand drive. I was given the chance to spend 24 hours with the latest right-hook Camaro in Auckland. 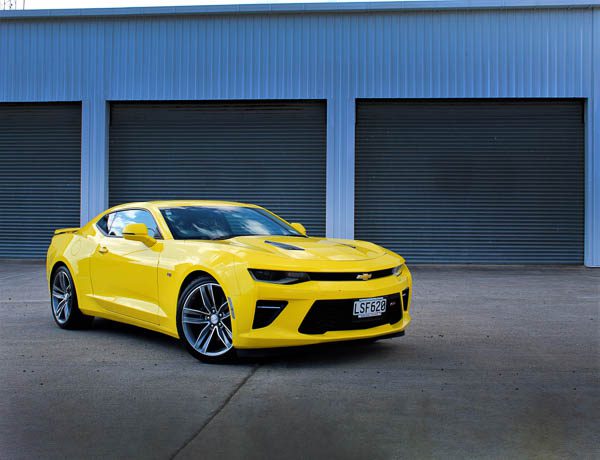 Brought to our shores to take on the might of the right-hand drive Ford Mustang, the 2019 Chevrolet Camaro 2SS is available through New Zealand’s six authorised HSV dealerships. The right-hand drive conversion process is professionally done by HSV in Australia before the cars arrive in New Zealand; it’s a proper conversion job too. This work, plus the car, puts the price at $104,990 NZD. The only customisable option available is $1,000 for metallic paint, although the Bumblebee yellow of my test car certainly had eyes on stalks.

The Camaro 2SS’s beating heart is the LT1 6.2 litre V8 with a fairly substantial 339kW of grunt and 617Nm of torque. This, coupled with an eight-speed automatic box, will allow you to reach the national limit in a blistering 4.6 seconds, which this writer can verify. Inside you get a very driver-focused cabin, containing nods to Camaros of the past while still feeling bang up to date. The driving position is nigh on perfect and the small steering wheel feels good clasped in your mitts. Standard kit includes 20-inch alloys, Brembo brakes, LED running lights, Apple Car Play/Android Auto, and dual zone climate control.

A press of the starter button and those quad tailpipes emit the sort of V8 bellow that would wake the dead. Blip the throttle and it crackles and booms like distant gunfire. There are three drive modes to choose from; Touring, Sport and Track. Touring mode allows you cruise along in comfort with the V8 burble slightly subdued in the background. The LT1 V8 also shuts down four cylinders if they aren’t needed, returning combined fuel consumption of 11.5L/100km. Change up to Sport and things get racier and louder, put it in Track mode and the steering and throttle response sharpens up, plus the shifts on the eight-speed box become quicker.

Now, old Camaros have always been lacking when it comes to undertaking the twisty stuff. This is no longer the case as the bendy B-roads out of Waiuku were devoured with such ease. The Camaro also feels incredibly planted and despite the slight girth, you always have the confidence to push hard. That said, you do have to be awake.

So how does the new right-hook Camaro stack up when compared to the Mustang? Well, the Mustang is $25,000 less expensive, but the Camaro rides better, is just as exciting and will be much more exclusive. Each to their own of course, but the Chevy just wins it for me.