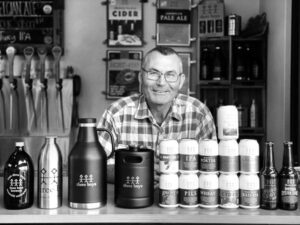 An independent panel of 24 judges assembled in March, chosen for their astute and discerning palates.

In March, Ralph sat at a table of three judges and an associate, critiquing around 45 beers over two days with the aim of finding the cream of the crop; the top 30 tipples out of 600 entries from 100 breweries and cider makers worldwide. No judge tasted their own, with brands under secrecy.

“It was a bit stressful waiting to see if the others agreed when you picked a fantastic beer, but rewarding when everyone thought the same!” Ralph says. “There were definitely a few standouts.”

The 30 winners were assessed on technical excellence, balance, mouthfeel and drinkability.

“New World has as a staple of individual beers on the shelves, so you can try out a new beer or cider. It’s then something to really enjoy and taste, rather than just grabbing a slab of beer.”

Ralph developed a fascination for the centuries-old liquid amber when working in beer paradise, Northern England, as a biochemist.

On returning home, he blended skill with passion and became a master of his craft.

“I compare it to cooking – boiling it up and adding in the herbs.

There’s hundreds of varieties of hops with identifiable flavours like passionfruit and pineapple, and many malts – from chocolatey to caramels, and even hundreds of yeasts; so many combinations!”

Ralph and Brigid Bungard started Three Boys in Garlands Road behind The Tannery 15 years ago.

“It was pretty rough and ready, he says, although he sometimes misses the “smallness” of the original brewery.

He reflects on retro Kiwi days of the 6’oclock swill when microbreweries were few.

“But you can now have a sophisticated treat, and a beer!” he says of the rise of the craft beer industry.

Ralph keeps seven staples in a good core range, naming them simply what they are.

Popular Three Boys Wheat made the final cut, being ranked in the coveted ‘Top 30’ brews.

The hazy wheat beer, a long-standing staple in the Three Boys range, impressed the judges’ taste buds with its alchemy of spices, coriander and zest, brewed with an authentic Belgium yeast.

Three Boys produce a range of beers from their Ferry Road site from the more familiar lagers and pilsners, through to rich dark beers and the ultra-modern, hop-forward styles of pale ales and hazy beers. And there are his quirkier concoctions, such as the barrel-aged Prunus Stave and the infamous Oyster Stout.

Yes, it really is made with Bluff oysters, to give a subtle brininess and a little seaside smell.”

Ralph doesn’t have a favourite beer.

“That’s like asking what is your favourite child,” he laughs. The name Three Boys aptly refers to the entrepreneurial dad and his two sons.

“Aside from a cup of tea, you can’t beat a beer when you’re thirsty.”

A full list of the Top 30 winning beers and ciders, as well as the 70 Highly Commended brews, can be found on the New World website at newworld.co.nz/Top30.