As we celebrate 125 years since women earned the right to vote, we also celebrate the winners of the fourth annual Hays NAWIC Excellence Awards as stellar achievers who are adding their unique voices to New Zealand’s construction industry. 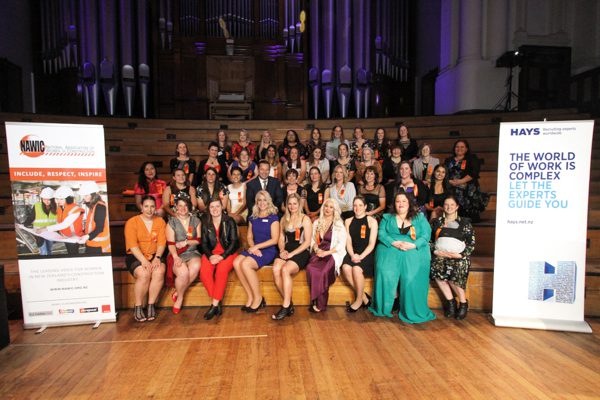 Held earlier this month at the Auckland Town Hall, the awards honour the inspirational achievements women are making across New Zealand’s construction industry. An aspiration to be the best in her field combined with a passion for empowering her staff saw Heidi Johnston of Windowmakers win the Professional Woman of the Year Award.

Pip Buunk from Fulton Hogan took out Tradeswoman of the Year for her groundbreaking role as New Zealand’s only registered female driller. Stephanie Thompson of Stantec won the Outstanding Achievement in Design Award. The Civil Water Team Lead in Stantec’s Christchurch office, she is noted for her delivery of several technically complex 3-Waters projects.

Described as “an empowering leader who is taking action to inspire women in construction”, Gabrielle Bush of CPB Contractors won the Helen Tippett Award for actively promoting the participation of women in construction. Elisapeta Heta of Jasmax won the Rising Star Award (office-based category) for her outstanding work in engaging with mana whenua and growing the cultural capacity of the organisation.

Amelia Gilbert-Milne of Brian Perry Civil and Jemma Dutton of CPB Contractors were joint winners of the Rising Star Award. The Excellence in Construction Administration Award went to Emlyn Moore of Fletcher Construction, while Jessica Curtis, an apprentice electrician with Integrated Systems Design, won the Apprentice and Student Award.