The spa-inspired bathroom trend has officially returned – back to the spa, that is. These days it’s all about bold, dark, sultry bathroom designs that evoke an indulgent high-end experience. 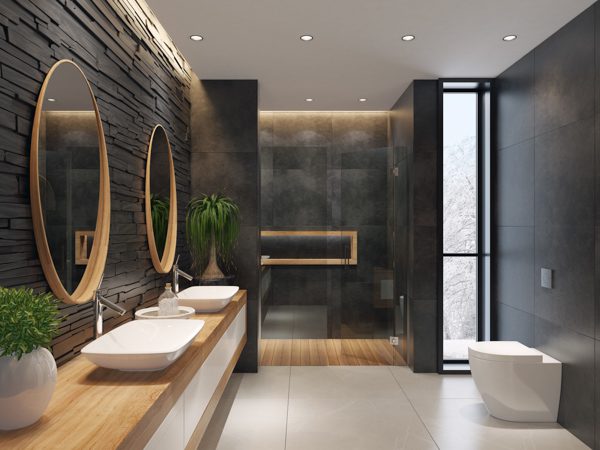 Bathrooms are often south-side windowless rooms, so take a walk on the dark side and enhance the cosiness. Black fixtures are now a mainstay in most bathroom ranges. They create a feature out of the functional, such as matte black shower surrounds and tapware. And finger marks won’t show.

Spa baths have lost popularity to the free-standing bath, which can be a focal feature in black. Add a black chandelier and candles to elevate to movie-star status.  Monochromatic bathroom wallpapers look striking in geometrics, metallics or vintage prints. Black-tiling combined with black-painted walls is effective, particularly with 1920s-style pedestal basins.

Black makes a statement around the edges in cornices, framing, mirrors and shelving. A dark vanity in a corner stands out, where white would otherwise just blend. Black ceilings are inviting, especially if the room is small with a tall ceiling. And against black aluminium windows, a black and white theme is a classic.