Getting back on the proverbial horse has taken on a much more literal meaning for champion harness racing driver Ricky May, who is back in the sulky again. 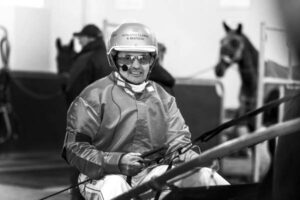 It’s been just six months since the seven-time New Zealand Cup winner was brought back to life after suffering a medical event on the track, but last month he climbed back in the sulky at Addington Raceway for a remarkable return at the winter meeting.

In one of the most shocking incidents in harness racing history, May collapsed mid-race while driving A G’s White Socks in the $30,000 Central Otago Cup at Omakau in Central Otago in January.

Thousands watched live and on television as fellow driver, 24-year-old trained physiotherapist Ellie Barron rushed to his side. He had no heartbeat.

Barron sprang into action, giving May the CPR that’s credited with saving his life – and breaking a few ribs in the process. Importantly, it kept the oxygen flowing to May’s brain until the medical team arrived.

Believed to have had no pulse for up to 10 minutes, the 62-year-old was rushed to hospital where he was later diagnosed with hypertrophic cardiomyopathy – a condition where the heart muscles thicken despite the heart itself being completely healthy. It’s a condition which has been known to affect young athletes at the peak of their physical prowess.

Now with a cardioverter defibrillator implanted in his chest, May is already back driving the tractor, welding and doing the heavy lifting around his Methven farm, so it was only going to be so long before he was back in the saddle.

“I’ve never had any time off before in my life,” he laughs about his enforced health break.

“I felt if I didn’t do it straight away I wouldn’t do it, so as soon as the specialist gave me the go-ahead, I got back in there.”

He had seven drives in his first meeting on 12 June. “I didn’t win but got one second and four thirds!”

Six months after “dying” he is able to laugh about it. Most are not so lucky. It’s a second chance and a remarkable one at that.

But May is not ready to watch the footage and he likely never will, he admits. “Everyone has said, ‘you don’t want to see it!’” he remarks.

In their 2013 Addington Harness Hall of Fame, May is credited with being a “man small in stature, modest of nature but big on achievement”.

“I wasn’t even remotely interested in the start,” he laughs. “My grandfather would train horses and I’d help out driving them, but I much preferred to go farming.”

When he left school he made the decision to stick it out with driving.

“You’ve got to give it 100 percent; there’s no use going half-pie. If you have success people start giving you more drives; you get on better horses, so there’s a bit of luck there as well. I was also lucky to have had a pretty supportive family.”

May has 2,949 career wins in New Zealand and has big plans to become only the third driver ever to gain 3,000 victories here. With his attitude, you can bet on it – literally and figuratively.