When Toyota invites you to the national launch of a new Corolla, it’s not an offer to refuse. So, I found myself flying to Toyota New Zealand’s HQ in Palmerston North to be among the first to get acquainted with the newest edition of New Zealand’s favourite car. 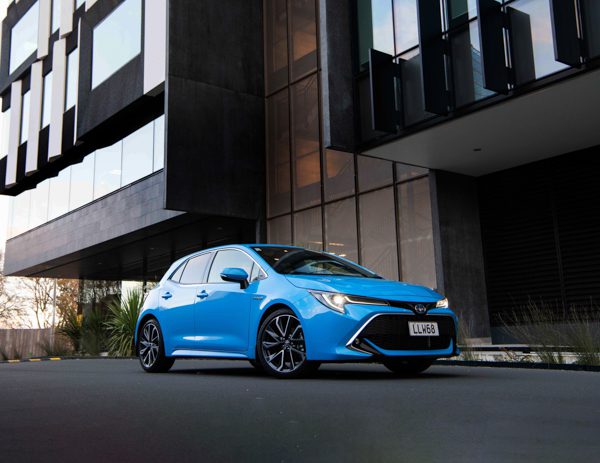 More than 44 million Corollas have been built over 50 plus years and these days, one is sold somewhere in the world every 15 seconds. In our neck of the woods, 25.6 percent of our national car fleet are Toyotas and close to 155,000 of those are Corollas.  On the first day of the national launch, we were given a tour of Toyota New Zealand’s parts warehouse. It is mind-boggling to see all the Toyota parts and accessories packaged and ready for delivery to dealerships throughout the country. We also got to see the 2018 Corolla up close for the first time.

There are three spec levels on offer for the new Corolla; the entry point GX, mid-range SX and top end ZR, with the choice of petrol (GX, SX, ZR) or hybrid powertrains (GX, ZR). The range starts at $29,990 for the GX Petrol and tops out at $38,490 for the ZR Hybrid.
Styling wise, the new car has a lower and wider stance than before. Chiseled edges, a more rounded rear and steeply raked screen gives a more muscular presence, which in this writer’s opinion is a good thing. The GX and SX get 16-inch alloys, while the sportier looking ZR gets some very pretty 18s.

ONE IS SOLD SOMEWHERE IN THE WORLD EVERY 15 SECONDS

Inside, the Corolla exudes a new level of upmarket feel. A simplistic design contrasts to a clear and concise infotainment system and buttock-hugging chairs, which on the ZR are leather and suede, are certainly very comfortable. Head and leg-room are good too. Safety kit, including Lane Departure warning, Dynamic Radar Guided Cruise Control and Road Sign Assist, also adorn the new car.
The next day of the launch event, it was drive time. I started out in the range-topping ZR Hybrid. The 1.8 litre hybrid system, shared with the new Prius, (90kW) is the most economical in its class at 4.2l/100km while emitting 97g/km of C02.

The steering is a tad vague however, thanks to Toyota’s new TNGA (Toyota New Global Architecture) platform, the lower centre of gravity makes for a more planted feeling in the bends. The eight-speed Direct Shift CVT changes well and the ride is supple and refined.
Swapping over to the SX Petrol, I found the new 2.0-litre Direct Force four-cylinder engine to be quite perky and eager to go, making driving round the Wairarapa a real giggle.

Power has gone up 21 percent to 125kW and torque up 15 percent to 200Nm. As far as first drive impressions go, the 2018 Corolla did not disappoint. Can’t wait to give both petrol and hybrid versions an in-depth evaluation on Canterbury roads real soon.