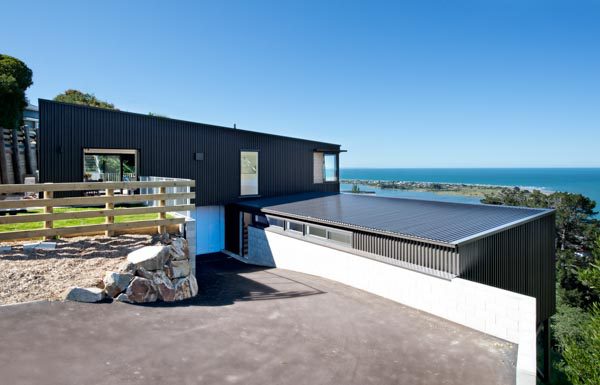 A search for hill sites led him here, but Ben initially rejected the section because its 30-degree slope meant the numbers just didn’t add up. However, a serendipitous price reduction put the numbers where they needed to be, and just like that the project was on.
Ben says the house is conceived in simple form, but the rectangular box shapes set against the slope, plus the magnificent views over Barnett Park to the mouth of the estuary, mean the effect is dramatic. Unusually, the three bedrooms are below the living space, but Ben has ensured that every room in the house has a view; from the kitchen, dining, and living area across the deck that spans the length of the room, it is panoramic. 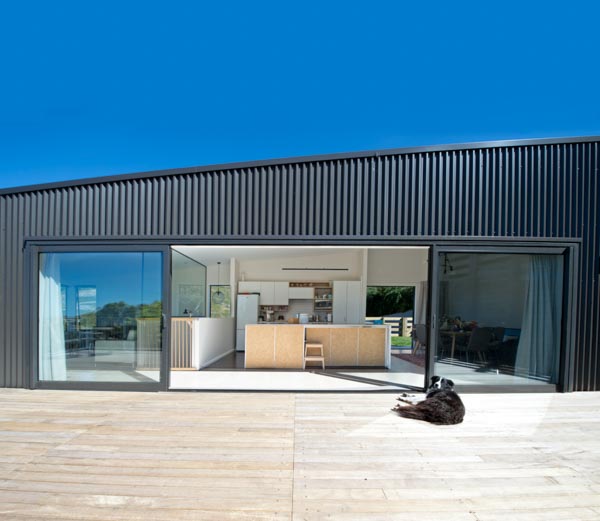 Budgets were key in material selections and resulted in lightweight construction utilising timber framing, including floors. Metalcraft Kahu profile steel was chosen because it works for both the low-pitched roof and the cladding. Interiors are neural toned to allow the views to prevail, and are again satisfyingly cost effective. The flooring is whitewashed Stranboard, and the kitchen is an undercover mass-produced modular purchase, customised with timber shelves and toe boards. It whispers bespoke, but came in at an astonishingly low $10,000. Necessarily complex foundations allow the top one metre of soil to slide, while all retaining walls are meticulously separated from the house to prevent ‘hammering’, meaning the house will stay intact in an earthquake. 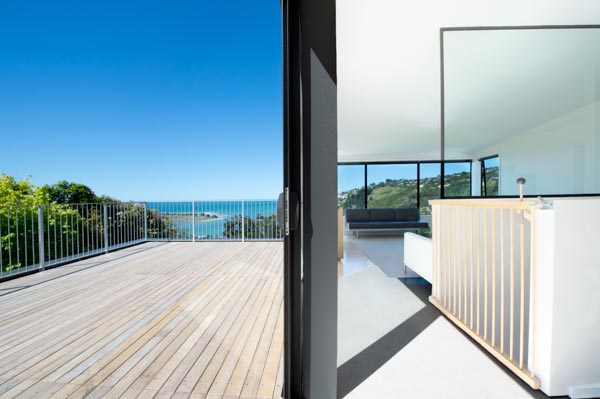 Keane Building constructed the house, with Chris Keane helpfully allowing Ben to manage certain elements to assist with the budget. “Chris has done a great job and nothing was ever a problem”. Chosen by Ben for their enthusiasm and positivity Ben believes “a project should be fun and these guys made it so”. Chris Keane says, “It was a real privilege being chosen to assist Ben building his home. We’ve worked with him in the past and really enjoyed collaborating with him, this time was no different. We find that Ben is innovative and pushes the boundaries, which is always enjoyable. Ben’s passion and willingness to collaborate makes him a real pleasure to work with, and we are thrilled we had the opportunity to work on this project.”