Invercargill’s long-time mayor Tim Shadbolt can now be called Sir Tim after being made a Knight Companion of the New Zealand Order of Merit for his services to local government and the community. 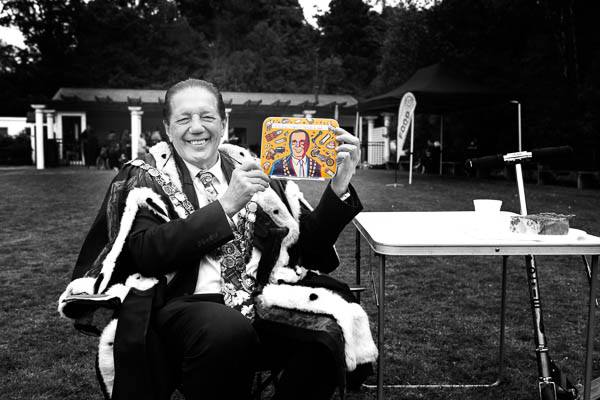 But the 72-year-old is still just Mayor Tim; the fun-loving Southlander with a cheeky grin and a heart of gold. We caught up with Sir Tim about one of his latest charitable endeavours.

You’ve partnered with the lovely people at Slingshot to raise funds for the Koha Kai charity through a unique limited edition modem (pictured) with your own mug on it. How important is Koha Kai to you as a charity?
What I liked about it was that it was looking at feeding kids and that’s so crucial to their development. It goes further than providing lunches; it looks at the whole process, from horticulture and the packaging of food, to distributing it as well. So it’s about so much more than just providing food.

How does it feel to be in a position where you can utilise your profile to make a real difference?
I think people who are well-known tend to spend a lot of their time and energy supporting charitable projects, which is a great. Myself and Gary McCormick did fundraise for a school in Kaikoura just recently. As a mayor you’re expected to contribute directly or indirectly to good causes and it’s great to be able to give a good boost to the community.

Standing-up for your causes and supporting the average Kiwi have always been important to you…
Yes, the opportunities come in all sorts of ways, often unexpectedly, such as Dancing with the Stars. I did the first season of Dancing with the Stars and raised $75,000 for the MS Society, so you can have fun and enjoy yourself and get the pleasure of giving.

Now you’ve got a Sir added to your name, how does it feel to have achieved the accolade?
I get teased a little bit by some of my counsellors that now I’m a knight, so now I’m their nightmare! I think it’s part of that Kiwi thing, making light of awards like this. On a more serious note, they are appreciated. Some of the work I’ve been involved in, especially with education projects like Zero Free Schemes, have had a big impact on provincial cities like Invercargill.

You were described as an inspirational leader and you’ve obviously made a lot of significant decisions during your mayoralty, why do you think people have connected so strongly with you?
Well I like to think I’ve added an element of humour to charitable work and local politics, carrying my concrete mixer behind the mayoral car for example and I think people appreciate that element in my work. Local government can be a rather droll affair at times; I hope I’ve added energy, excitement and humour to it.

What do the next 12 months have in store for you?
Well first of all there’s an election coming up in five months, then I’ll work out my options from there, but hopefully carrying on the same work I’ve been doing for 32 years as a mayor and I guess another 10 years as a social and political activist.