It’s crazy to think that the September 2010 earthquake that rocked the nation and brought so much destruction was a decade ago. The little town of Kaiapoi seemed to receive the short end of the stick, as one of the most damaged areas in the greater Canterbury region. 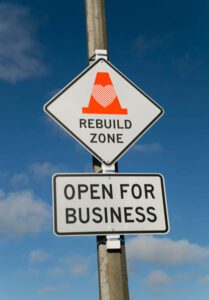 Current affairs crew Frank Films visited the community following the shakes and again a decade after the disaster.

Kaiapoi is the story of their return.

The short film has a running time of just over four minutes and within it, a journey spanning 10 years.

Arguably the first quake was Kaiapoi’s worst disaster to date, with one third of homes severely damaged, 1,048 were demolished and many community facilities lost.

Fast forward to present day and it would receive the award ‘little town, big success story’ (if there were such an award).

But that’s not all!

The water-loving river town hopes to upgrade further with the inclusion of an aqua sports park featuring a man-made wave, white-water course and cable wakeboarding.

As the saying goes, ‘make the best of a bad situation’ and we think Kaiapoi did exactly that.