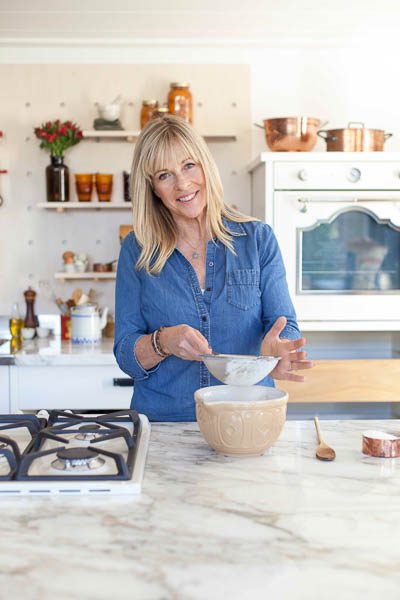 I could almost tell you them all too; it’s like this huge computer in my head that would drive anyone else mad, but I love it,” she laughs.

It was her dad that was the engineer by trade and, although Annabel had always thought the “clever engineer gene” had missed her, the penny dropped when she was asked recently ‘how do you engineer a recipe?’

Cooking wasn’t a fashionable thing to do when Annabel first started dipping her fingers in the baking bowl, but she discovered an incredible sense of achievement being able to give others pleasure through her baking. “I would feel useful and successful and have a lot of fun,” she says. “And as I went through life subconsciously, without realising it, I was always cooking.”

It was ironically food poisoning rather than the food itself that paved the first step in her career path. During her OE, she got food poisoning in South America and ended up staying in a village in Brazil, renting a room with an Argentinian couple. “All I wanted to do was cook!” she says. “It made me feel anchored and good.”

When that couple asked if she could make croissants, she wasn’t going to let the fact that she had never made them before in her life hold her back. Soon, she had her own croissant business! When she eventually found her way back home she started a catering business and writing for The Listener. Not knowing where to go next, she did what all good fan girls do and she wrote to Julia Child, who invited her to America to introduce her to the world of cuisine. She spent the late 80s and early 90s learning everything she possibly could about cuisine.

“I found while travelling that food is the bridge between us all. It can help you discover cultures, ingredients, nature, community, and also this wonderful idea of creativity,” Annabel says.

“The idea of a recipe being written down is a reasonably recent invention; in places like India and China, the language of cooking is handed down. People can have nothing and yet make these amazing foods; feeling part of this world is very nourishing.”

It’s this travel that formed the basis for her understanding of ‘food families’ and ‘flavour profiles’. “Food is like music; you learn a few chords and before long you can riff. When you understand the different flavour profiles and how they go together, it opens up your world.”

What this means is that the core ingredients of a salad may be the same, but it’s the understanding of flavours that enable you to transform those vegetables into a South East Asian salad or a Middle Eastern salad.

A lot of what Annabel turns her award-winning hand to these days is driven by ingredients and what’s available – particularly in her own Wanaka garden. It’s 12 minutes from her place to the shop, so if she doesn’t have to go, she won’t, learning instead to be resourceful with what she has. Her Essential cookbooks were written on this basis – the idea of giving people a basic toolkit of basics that can form the basis of just about anything.

“I’ve always been interested in helping people to feel empowered and confident with cooking. This isn’t MasterChef; it’s home. Most people are tired at the end of the day, so dinner doesn’t need to be an enormous amount of work and palaver; it’s about taking something fresh and knowing the easiest way to make it yummy.”

She’s an “old hippy at heart”, or, more formally, a founding member of the Sustainability Council, so sustainability is pretty close to her heart.

While a key aspect of this role is keeping GMOs out of the food in New Zealand, even the basics of ‘reuse and recycle’ are important.

“I’m a big believer in getting things when they’re in season, like tomatoes, and freezing them so I’ve always got it.” She’ll cook spinach in olive oil and freeze handfuls of it so it’s always available as a meal addition.

Another top tip is when you get to the end of the week and your salad greens have gone limp, or your rocket has wilted in the hot sun before you’ve made it back to the house, put them in a big bowl of water and ice cubes, and the water will pump the cells up again, bringing them back to life.

Treat protein as a treat and have a meatless meal each week, she says. Although most New Zealand meat is freefarmed, so it’s not as bad for the planet, cutting back can certainly make a difference.

“I’m a big composter and worm farmer, in the same way we understand our gut microbes are important to keep healthy, the soil is as well, so having compost and creating worm farms is a fantastic thing.”

And trying to avoid plastic is a biggie. So why not put a plate over food in the fridge instead? After all, as Annabel says, “If we all just do one little thing…”