Impressive not only in form and function, Christchurch’s revered Tūranga has added yet another accolade to its long list – this time, for its eco-friendly design. 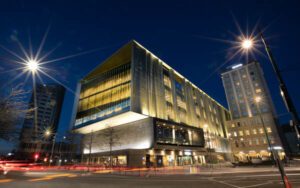 Tūranga revitalised the CBD when the $92m five-storey Warren and Mahoney-designed public library opened in Cathedral Square in late 2018.

Now, it has become one of the few public buildings in New Zealand to be awarded a 5 Green Star – Custom Design Certified Rating from the New Zealand Green Building Council (NZGBC) in recognition of it exceeding best practice benchmarks in a range of areas including energy and water use, indoor environment quality, use of sustainable materials, reduced ecological impact and reduced emissions.

Christchurch City Council Head of Libraries and Information Carolyn Robertson says Tūranga was designed with both people and the environment in mind.

“We wanted it to be a place for people, but we also wanted it to have minimal impact on the environment. Our goal was to create a sustainable building with a low carbon footprint that was both architecturally striking and welcoming.” 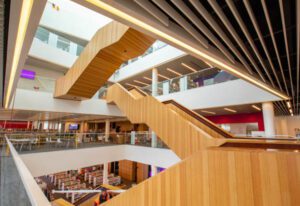 Last year it was also named as one of four finalists for the 2019 International Federation of Library Associations/Systematic Public Library of the Year Award.