In recognition of the new decade, we caught up with My Food Bag’s development kitchen team, comprising of Nadia Lim and 13 talented chefs and nutritionists, about what we can expect to see on the culinary horizon for 2020. 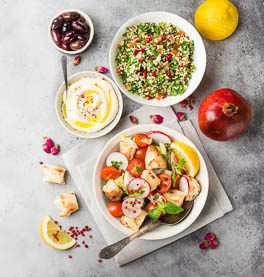 1. Mindful eating – Consideration for health and the environment are on the rise.

When it comes to our food choices, people are more aware of what they’re putting in their bodies and their footprint.

Mindful eating is also about being present while we eat, appreciating food and spending quality time at the dinner table.

2. Out with fad dieting – When it comes to health and weight loss, sustainability in all things is the way forward.

Understanding the tried-and-tested method of eating real, nutritionally balanced food with a vegetable focus will become the ultimate goal.

With Kiwis short on time, they want to be able to prep and cook food fast, but this doesn’t have to mean eating badly.

Homecooked and veggie-packed ready meals are in hot demand.

4. Zero-waste and home composting – Over the past decade ‘nose to tail’ and ‘stalk to tip’ have become commonplace.

This year we’re continuing to lessen our waste from the beginning to the end of our food’s journey.

Home composting is also on the rise with composts and urban worm farms increasing in popularity.

5. Mezze plates are the new platters: The bowl reached its peak in 2019 and although this movement isn’t going anywhere, the platter is catching up – think Middle Eastern influences, elaborate grazing platters and mezze plates.

Thanks to the rise in popularity of baby-led weaning, olives and sushi are becoming everyday staples for many youngsters.

My Food Bag predicts New Zealanders are raising a generation of foodies interested in eating and cooking nutrient-dense foods with bold flavours.

Peanut, almond, cashew and hazelnut butters, as well as tahini are becoming more common in cooking, adding flavour and texture to sauces and dressings.

Rapidly growing in popularity due to the rise in gluten-free and coeliac and the desire for more diverse foods, these flours are becoming regular supermarket purchases for those without dietary requirements.

9. Fermentation: Kombucha and sauerkraut are so 2019! However, the rise and focus on gut health is here to stay in 2020 and this will see an increased focus on improved digestion from prebiotics, the non-digestible starch our gut bacteria feeds off, which is typically known as fibre.

10. Is smashed avo out? We’d be lying if we said avo on toast is on the out, but the bread base is changing and Kiwis are becoming increasingly creative when it comes to their avo toppings and add-ons.

We’re moving from ciabatta and rye to bespoke sourdoughs made from fermented oat and potato, as well as gluten-free almond, turmeric and cricket bread.

Meanwhile, favourite toppings in 2020 will include whipped pumpkin and feta, tahini or almond butter and kimchi mushrooms, crushed peas or crispy buckwheat and hummus.